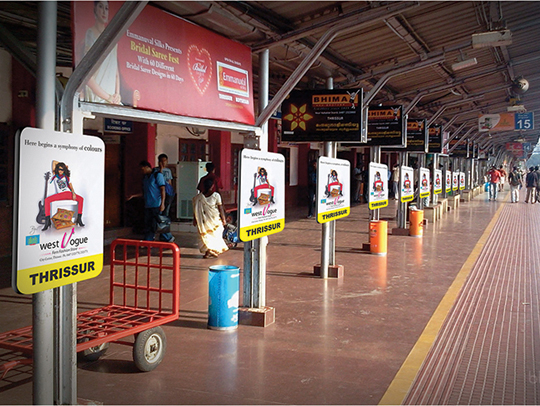 Railway Station Branding Service in Delhi, Rail & Railway Station Hording Advertising Ad Agencies in Delhi. A Rail is massive space when it comes to advertising. Lots of space and all possible type of ads can be implemented in a metro rail. All possible places wherever commuters touch is viable space for placing an ad. The outer and inner surface of the trains, platforms, ceilings, corridors, escalators, stairways, all these places are available for placing ads. All types of ads like banners, posters, flex board, glow signs, bill boards, running displays, animation can be implemented in a metro rail.
Having advertisement in a metro rail is a great boost to the business and its product which is being displayed in the ad. Business of getting ad space in metro involves lot of competition and hence the space is quickly sold out. The reason for it is the space once gone is gone for the entire year and waiting for another year is quite a big business risk. Businesses wishing to place ads in metro have to get in touch with these agencies and place their ads for boosting sales.
A major advantage of having your ad in metro rail is that the ad will be displayed at the same place for the duration which you have opted for, month, quarter or year. Having seen the ad on daily basis automatically hits the sales exponentially as the purchasing decision has been affected by daily visibility of the commuter. An ad when seen daily does wonders on your business improvement and engages a long term gain from the product perspective point of view. The journey of 30 minutes to one hour in a metro itself is quite pleasant and when you watch ads sitting in a pleasant environment, decisions are bound to affect. Railways have been having advertising since a long time but technology has made it more interesting by the time metro came in. The noise less coaches of metro caters to the visual senses in a very elegant manner. Get you business on metro and get it running.

We have media on all major railway stations and have conducted many compaigns.
Few of the stations we deal in :-